Skip to content
by Andreea from Find It In The Book 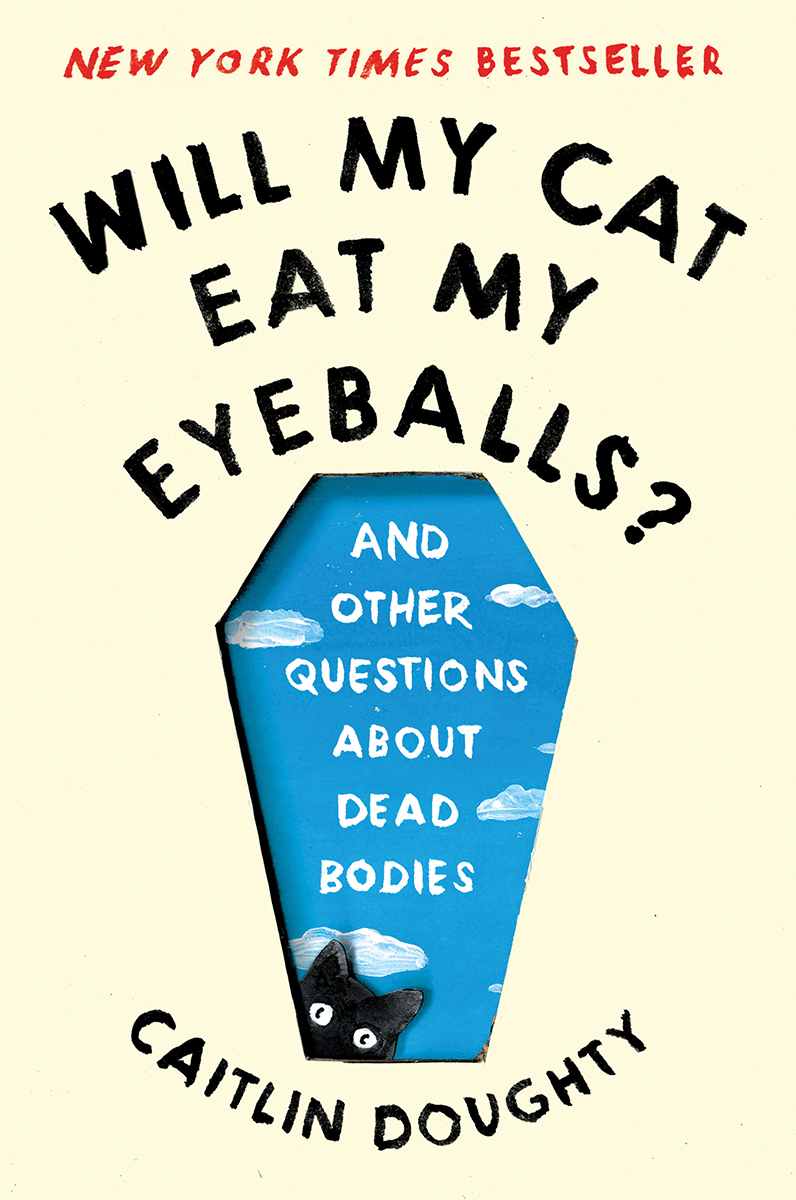 1. As a funeral director, I honestly have no idea what equipment a proper decapitation requires.

2. The beetles are incredible creatures, used in museums and forensic labs to delicately eat the dead flesh off a skeleton without destroying the bones themselves. Dermestids are happy to wade into a gruesome, sticky mass of decaying flesh and delicately clean around even the tiniest of bones.

3. Scientists now pretty much agree that getting useful DNA from animals in amber is not possible. DNA just disintegrates too quickly. Oxygen levels change, temperatures change, moisture levels change, all of which cause the puzzle pieces that make up your genetic code to fall apart. It’s a mess. Even if they did get some of your material extracted, they’d likely have to fill in the gaps with . . . someone, or something, else.

4. But if you want to preserve your DNA so that you could perhaps be cloned in the distant future, you might want to consider something else: cryopreservation. When you die, we can flash freeze your cells in liquid nitrogen, way down in the negative degrees Fahrenheit.

5. Blood, bacteria, fluids: they’re reacting, changing, and adapting now that their host is dead. And those changes mean . . . colors.
The first colors that appear after death have to do with blood.
[…] In the first hours after death occurs, a dead person will look paler than before, especially in places like their lips and fingernails.
[…] In as little as half an hour, the iris and pupil cloud over and turn milky because the fluid under the cornea has stagnated, like a creepy little bog.

7. You could call this color “putrid,” and you’d be totally correct. The green-purple-turquoise blossoms of putrefaction are caused by bacteria.
[…] As the bacteria multiply and spread, so does the green discoloration, eventually ripening to a darker green or black.

8. Autolysis happens when enzymes begin destroying the body’s cells from the inside. This destruction process has been quietly occurring all along—since a few minutes after the person died.

9. You will start to see signs of a venous patterning, or marbling, of blood vessels near the surface of the skin. In a corpse, this marbling is the visible sign of blood vessels decaying and hemoglobin separating from the blood. The hemoglobin stains the skin, producing delicate color schemes in shades of red, dark purple, green, and black. The hemoglobin ring breaks down into bilirubin (turning you yellow) and biliverdin (turning you green).

10. In the first ten minutes of the cremation, the flames attack the body’s soft tissue—all the squishy parts, if you will. Muscles, skin, organs, and fat sizzle, shrink, and evaporate. The bones of the skull and ribs start to emerge. The top of the skull pops off and the blackened brain gets zapped away by the flames. The human body is roughly 60 percent water, and that H2O—along with other body fluids—evaporates right up the machine’s chimney. It takes just a little over an hour for all the organic material in the human body to disintegrate and vaporize.

12. What are we left with at the end of a cremation? Bones. Hot bones. We call this pulverized mess of molten bones “cremated remains” or, more commonly, ashes.

13. This isn’t a full human skeleton, mind you. Remember, the organic material in our bones burns during the cremation. What’s left behind in the cremated remains is a thrilling combo of calcium phosphates, carbonates, and minerals and salts. They are totally sterile, which means you could roll around in them like a snowdrift or a sandbox and be perfectly safe. They don’t have DNA left in them, either.

14. It’s more height than weight that determines how much ash is in that doves-and-roses urn.

15. So, if you happen to have feces or urine in the chamber at the moment of your passing, they’re now free to go.

16. If someone dies mysteriously, their stomach and poop contents can provide important clues. The person performing the autopsy may end up picking through their feces, searching for any anomalies that could explain the death.

17. This type of twin is so rare that scientists still don’t fully understand what causes twins to conjoin. The most popular theory is that conjoined twins start as identical twins. Identical twins start as a single fertilized egg that divides in two. If that egg doesn’t divide completely, or takes too long to split, then the twins might be conjoined. Another theory believes the opposite: that conjoined twins are two fertilized eggs fusing together.

18. Even if you happened to be making a silly face when you died, face muscles relax along with everything else during primary relaxation. Your jaw and eyelids will fall open and your joints will get all floppy (“floppy” being the medical term). Say goodbye to your wacky face.

19. Rigor mortis is the Latin name for the stiffening of the muscles that starts around three hours after death (even sooner in very hot or tropical environments).

20. The muscles in your body need ATP (adenosine triphosphate) in order to relax. But ATP requires oxygen. No more breathing means no more oxygen, which means no more ATP, which means the muscles seize up and can’t relax. This chemical change, collectively called rigor mortis, starts around your eyelids and jaw and spreads through every muscle in the body, even the organs. Rigor mortis makes the muscles incredibly stiff. Once it sets in, that body ain’t movin’ from whatever position it is in. Funeral directors have to massage and flex the joints and muscles over and over to get them to move, a process called “breaking rigor.” This process sounds noisy, full of cracks and pops. But we’re not snapping bones; the sounds are coming from the muscles.

21. Unfortunately, rigor mortis eventually goes away. Every dead body is different, and the environment plays a big role in the timing, but after about seventy-two hours your muscles will go all floppy again—along with your duck-face lips.

22. Instantaneous rigor is exactly what it sounds like. When someone dies, they skip right over the floppy muscle relaxation stage and go straight into rigor mortis.

23. “taphophobia”, or the fear of being buried alive.

24. But once you’re brain-dead, there is no coming back. Not only have you lost all the upper brain functions that create your memories and behaviors and allow you to think and talk, but you have also lost all the involuntary stuff your lower brain does to keep you alive, like controlling your heart, respiration, nervous system, temperature, and reflexes. There are gobs of biological actions controlled by your brain so that you don’t have to constantly remind yourself, “Stay alive, stay alive . . .” If you are brain-dead, these functions are being performed by hospital equipment like ventilators and catheters.

25. If you are in a coma, on the other hand, you are legally very much alive. In a coma, you still have brain function, which doctors can measure by observing electrical activity and your reactions to external stimuli. In other words, your body continues to breathe, your heart beats, etc. Even better, you can, potentially, recover from a coma and regain consciousness.

26. Checking for spontaneous respiration. If you are removed from a ventilator, CO2 builds up in your system, essentially suffocating you. When blood CO2 levels reach 55 mm Hg, a living brain will usually tell the body to spontaneously breathe. If that doesn’t happen, your brain stem is dead.

27. But no worries, the flight crew will whisk the body away immediately and store it out of sight, right? Uh, no. They will 100 percent leave it in the seat next to you.

28. If we know you ordered pizza at around 7:30 pm on Tuesday, and your corpse is found on Friday, the state and position of the partially digested pizza inside your body can give clues as to how long you were alive after eating. If there is a pile of barely digested pizza in your stomach, we know that you died soon after your last meal (which you did). If the pizza had been turned into a paste and sent on its merry way through the gastrointestinal tract, we’d know that you had time to digest, and died much later in the evening. This is all part of discovering the postmortem interval, a phrase that means “how long you’ve been dead.”

29. As long as the death was relatively sudden and the dead person was in otherwise good health, cadaver blood remains usable, as Dr. Shamov discovered, for up to six hours. In other words, donation is a go—though obviously it is better if the blood isn’t tainted with medication or communicable diseases.

30. White blood cells have several days of activity left in them after the heart stops beating. If the blood is sterile and in good condition, cadaver blood donation is perfectly fine.

31. It is unlikely that a dead body is going to give you the same disease that killed the person—or any other disease, for that matter. Most pathogens, even nasty ones causing tuberculosis or malaria, just don’t live that long in a corpse after death.

32. In one study, about half of the people who had a near-death experience said they were fully aware they were dead (which could be good or bad, depending on how chill with death you are). One in four people said they had an out-of-body experience. Only one in three actually moved through the good ol’ tunnel. Also, some bad news: we imagine NDEs as being positive and blissful, but that was only true about half the time. Turns out they can be pretty terrifying, too.

33. scientists (even the ones who believe in God) also believe that the brain is also capable of making things seem and feel magical. They believe that biology is what shapes our final moments.

34. There is strong evidence that bone worms have been eating giant marine reptiles since the time of the dinosaurs. That means the whale eaters are older than whales themselves. Osedax are nature’s peak bone eaters, and they’re even sorta nice to look at, orangey-red floating tubes covering bones like a deep-sea shag carpet. Pretty amazing, given that scientist didn’t even know these creatures existed until 2002. Who knows what else is out there in the world, devouring bone?